Top 10 Board Games that Will Make You Quit Netflix

Spring break might be over, but it’s not a reason not to take time to play board games with your children (or with your friends). I love board games so I decided to share my 10 favorite ones with you. Why don’t you take advantage of the awful temperature we’ve been having and try a new game? Enjoy! ????

First thing first, here are five games your little ones will love.

Dixit is the new Monopoly, you NEED it in your board game collection. Besides being really fun to play with your children (this game is 8 years and older) the graphic designs of the 84 cards are unbelievable. The illustrations are amazing. What’s the goal of the game? You have to find out which card illustrates best the sentence the story teller tells. Watch out! Only one picture is the right one…You’ll have so much fun trying to figure out which one! For more information click here. 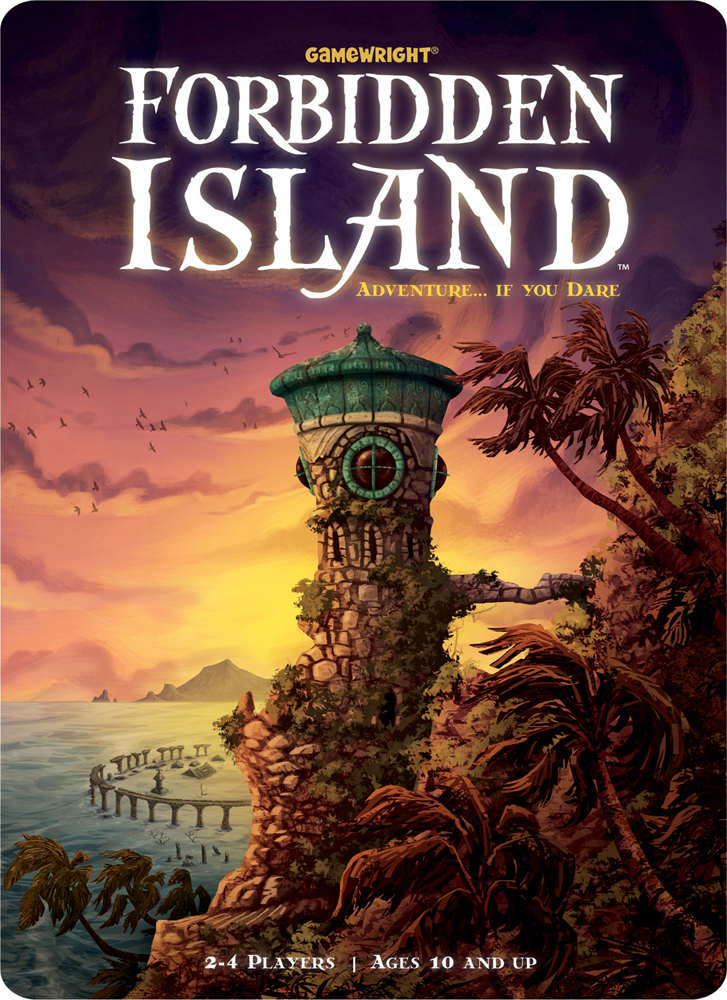 Forbidden Island is a cooperative board game that will please your children of 10 years and older. Instead of playing against each other, you’ll have to work all together to win. How does it work? It’s really simple. All you have to do is find the 4 treasures hidden on the island and get out of there. Easy? Not really. There are parts of the island that are forbidden and the island is sinking. You have to make plans so you can escape before everything falls apart. As you have to escape the island by flying, you MUST make sure all players are on the heliport before take-off. Good luck!

Hiboufou is an observation game, for children of 8 years and older. This game is played with cards representing colorful owls. How do you play? At the beginning of the game each player gets three cards. Then when your turn comes you can put one, two or three cards face up in the middle of the table. But wait, there’s a catch. When you lay down your owl it has to match the color of the last owl that has been put on the table. The player who plays his three cards can keep all the other cards on the game. The winner is the player who has the highest number of cards when all cards are played. A simple game for the whole family! ????

Speak out is a game you’ll need self-deprecation to play. I’m telling you, don’t be self-conscious playing this game. You’ll be laughing out loud all night long I guarantee it! What I like about this game is that it’s children friendly (8 years and older). All you have to do is put the mouthpiece in your mouth and try to make people guess a sentence. Easy? Not so much! The player with the most card at the end of the game wins!

Here’s a little preview of what you’ll look like… ???? 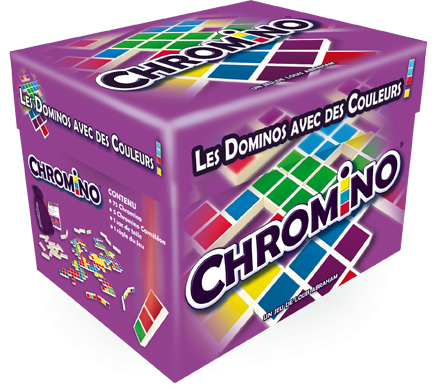 Chromino is a game mixing colors and dominos. Children of 6 years and older will have to use their observation and tactical skills to win. A simple game you’ll enjoy playing with the whole family. At the beginning of the game each player receives 8 dominos and choose a special start tile. Just like regular dominos, you have to connect your dominos with one of the tiles already on the table. But be careful, chameleon tiles will try to mess with your plan. The first player to empty its hands win. As simple as A, B, C!

Who said board games are for children only? Here are five games you’ll have fun playing with your friends… and a glass of wine. ????

Mysterium is an investigation and cooperative game. This game is innovative and interesting. Again you’ll be blown away by the graphic designs of the game. One of the players is the ghost and the rest of the players are the mediums. To win the game, the players must find the assassin, the location of the murder and how the victim died. Sounds a bit like Clue? A little, but this game is much more complex and exciting. ???? The ghost is amnesic and unable to talk, so he can only communicate with cards. Mediums have to help the ghost remember how he died by figuring out what the pictures on the cards mean. The mediums have seven hours (not real hours, the game has its own timeline) to find out everything. This game is a must have! For more information, click here. 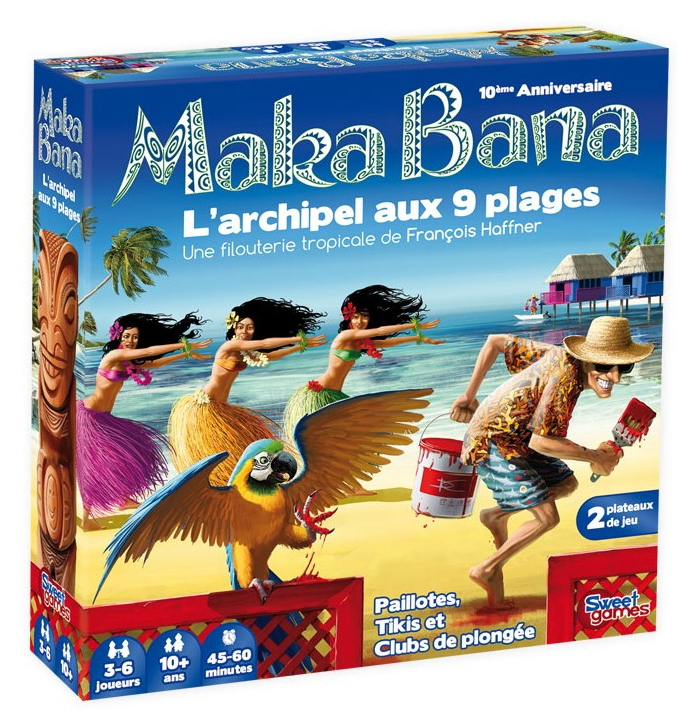 Maka Bana is a game where you’ll have to bluff. To win this game you have to build huts and be the one with the most huts on the most beaches. You’ll want to have all your huts at the same place to gather more points. You’ll have to guess where the other players want to build their huts and try to prevent them from trying. Don’t forget, other players can steal your huts by painting them with their own color. This game might start some vendettas… Stay calm it’s just a game. ???? 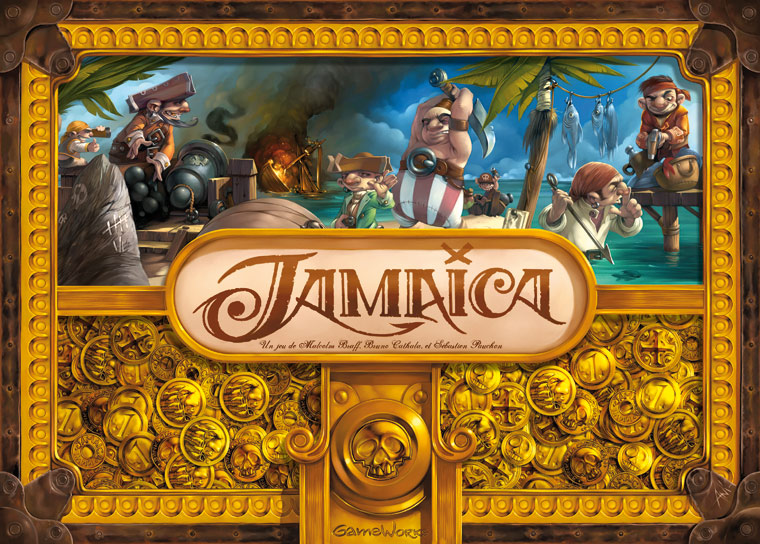 After a long career in piracy, Captain Henry Morgan skillfully gets appointed to be Governor of Jamaica. He suggests a race around the island to the players. The winner of said race is the player who piles the most money while racing. Players will fight against the sea hazards and must keep an eye on their food. Of course, the players can fight each other with cannons. A simple game everyone will enjoy. Click here for more information.

Codenames : Pictures is a game where players have to think from the beginning to the end. It’s a game of association you can play with two or more players that will be separate in two teams. You’ll be either a spymaster or a spy. To find under which picture the informant is hiding, you must pay attention to the clue both spymasters will give. Be careful! You wouldn’t want to contact your enemy or the ASSASSIN! If you like this game, you can also try the other Codenames games. ???? 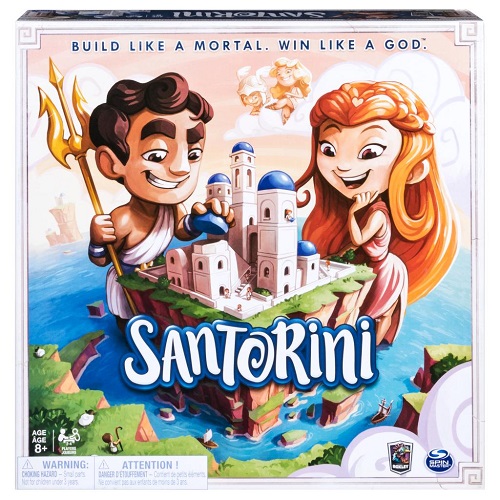 Santorini is a simple game that will do the trick when you have friends over. It’s basically like chess, but you can play with 2 to 4 players. The goal is to knock out your adversary by moving your builders. Start by building your 3D village and when your turn comes, you’ll have to choose between two actions. The goal of this game is to bring one of your builders to the third floor of the building. You’ll also have variable player powers that will change the way the game is played. So it feels like you are playing a new game every time. ????

building it up to break it back down

You can find these games in any board game store. What are you waiting for? Go buy one and spend quality time with your family and friends!

The Booklet is happy to work with a team spontaneous contributors. To be part of it, write to us at [email protected]!

3 Tips to Improve your Running Technique for Greater Results

Running has steadily been gaining in popularity over the past few years. It's a physical activity that merits being discussed. It often begins with an... One thing dogs love to do is CHEW. They’ll gnaw on pretty much anything, including furniture, shoes and baseboards! They chew when they’re bored or...

Susan Parker
Lire l'article
Articles of the month
1 A Trip To Belize: Two Hotels To Discover
2 For the Survival of Your Feet: Comfy High Heels!
3 Be Bohemian and Chic at the Same Time Thanks to a Well Cut Dress
4 Yes, Love Still Exists
5 Running in Montreal in Winter?
Next articles When Life Moves Too Fast