Catcalling: it needs to Stop During a discussion with several guys I know, on the subject of catcalling, some of the comments made were “it’s a compliment” and “if you’re going to wear a short skirt, you should expect to get catcalled”. Seriously? It got me to wondering if some women actually enjoy it? What do you think?

Personally speaking, I find catcalling degrading and completely unnecessary. I’ve never felt an overwhelming urge to shout across the street, at two in the afternoon no less, to tell a guy that he’s got a great ass. These days, it seems like you can’t set a foot outside without someone making a comment on your physique. “Great tits”, “Nice ass”, “Heyyy there, girlie”, “I’d do ya”, etc. 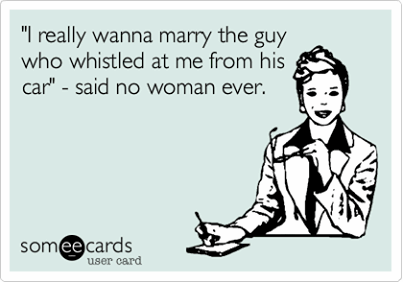 At one point, I started wondering if catcalling was a cultural thing. Perhaps it’s totally common place in some countries but the facts state otherwise. The hashtag “#MiPrimerAcoso” (the first time I was harassed) is showing up more and more in Mexico social media. These testimonials by Mexican women are troubling. They speak of the verbal harassment and public physical assaults to which they’ve been subjected. Is there even one woman on the face of this planet who hasn’t been harassed?

We’ve all experienced, at one time or another, being followed and having to change the route we had planned on taking, or making believe that we’re talking on the phone (or not), or feeling guilty for not being more “covered up”, or for not handling the situation differently.

The discussion I referred to at the beginning of this post has made it abundantly clear to me that sexual education is clearly lacking. A catcall is not a compliment; otherwise, wouldn’t women return the supposed compliment in kind? Women aren’t “asking” for that kind of “attention”.

I’m well aware of the fact that sexuality differs from one person to another. What I have yet to understand is why men feel the compelled to catcall. Why do men feel the need to lord their supposed superiority over women? Why do men have such a hard time keeping their penis (#oops) in check? Pornography, prostitution, strip joints and catcalling: it all revolves around men’s sexuality. Feminism is still very much needed in today’s society. For the record, women don’t “become” feminists because they haven’t been properly fucked, or because they’re lesbians, or they haven’t come to terms with their femininity, or they think they’re superior… Feminism is about equality  of the sexes.

What are your thoughts on the subject of catcalling?

Why Do I Need Insurance Abroad?

To tell you the truth, I never really thought about car insurance , especially abroad... But all the same, when my mother found out I... Douanka Gendreau
Lire l'article
Articles of the month
1 A Trip To Belize: Two Hotels To Discover
2 For the Survival of Your Feet: Comfy High Heels!
3 Be Bohemian and Chic at the Same Time Thanks to a Well Cut Dress
4 Yes, Love Still Exists
5 Running in Montreal in Winter?
Next articles Aromatherapy, a gentle complementary medicine worth getting to know